The raison d'être of SmartAgriHubs is inclusive and exponential Agri-digital community and network building, showcasing Agri-digital innovation which leads to more sustainable and competitive European agriculture. In Innovation Experiments there has been a constant push to go farther: How can we innovate? What else can we discover? What can we re-use? Who else can we involve in this multi-actor ecosystem?

While many achievements are evident, a bit of self-reflection prompted a question: In our quest for inclusiveness and innovation, had we overlooked the obvious?

What about women in Agri-tech and their under-utilised wealth of knowledge and capacity?

On the premise that change begins from within, the project management teams of IoF2020 and SAH set up a Gender Task Force with two connected teams of communications and analysis. Some preliminary internal analysis was carried out in both projects. We found some uncomfortable truths. Only 14% of project coordinators were women within IoF2020.

Research teams in SAH consisted of 25% women. In total, women represented 21% in Use Cases and 32% in Innovation Experiments. All this, in spite of the fact that both project teams include women and men committed to gender balance.

How did this happen? And more importantly, what can be done?

This number is decreasing compared to 2011, so we cannot argue that time will deal with this issue. However, this study also found that if more women were to enter the digital jobs market, it could create an annual EUR 16 billion GDP boost for the European economy. McKinsey estimated a global amount of 12 trillion. Other studies have found that companies with gender balanced boards demonstrate better decision-making and that companies with more women in management have better financial performance.

It is time “to walk the talk”

Our Gender Task Force sets out a path for the wider Agri-tech community, providing analysis, sharing information and consolidating various resources and initiatives, good practices and metrics to measure.

We see this as a positive challenge that requires innovative thinking and a conscious effort to “connect the dots” in an inclusive manner. In this toolbox we will share more news and results, as well as opportunities for participation in a wide range of initiatives.

The efforts of our Gender Task Force are now expanding beyond our project. We are reaching out to other Horizon 2020 projects and organisation, for greater impact.

The Gender Taskforce of SmartAgriHubs has created this survey to help fulfil its aim to ensure that SmartAgriHubs ecosystems, as well as affiliated organizations, are gender balance aware and inclusive. 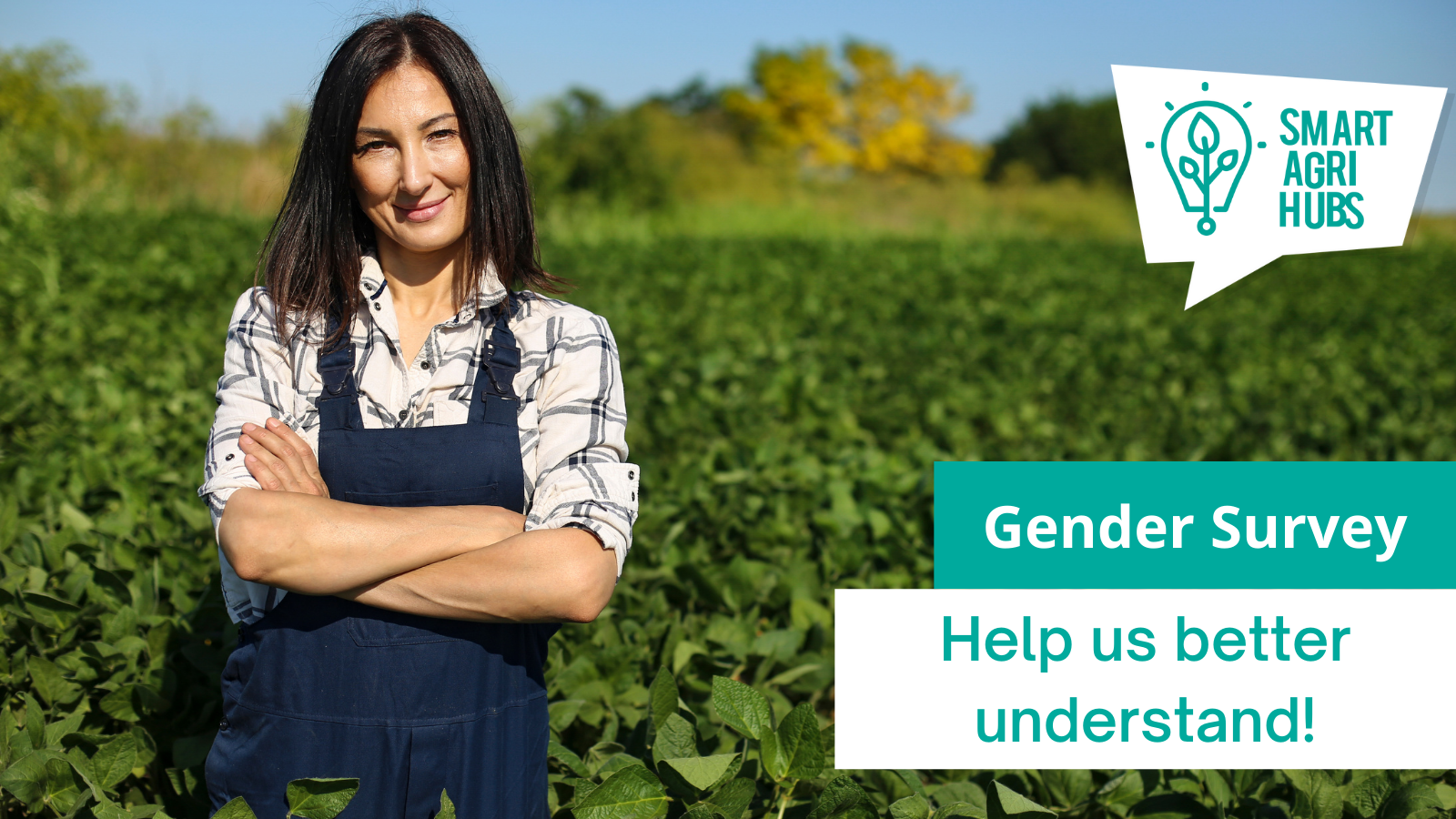 In particular, the Gender Taskforce wishes to provide the analysis and communication tools to both women and men so that they can take action within their own agritech contexts and implement solutions.

Help us improve by answering this survey!

In the continuation of the Gender Equality Week 2020, a recurring social media campaign has been launched: #GenderFriday. On Friday, social media posts referring to gender equality in the agri-tech, tech and agricultural sectors are shared on the SmartAgriHubs social media channels. 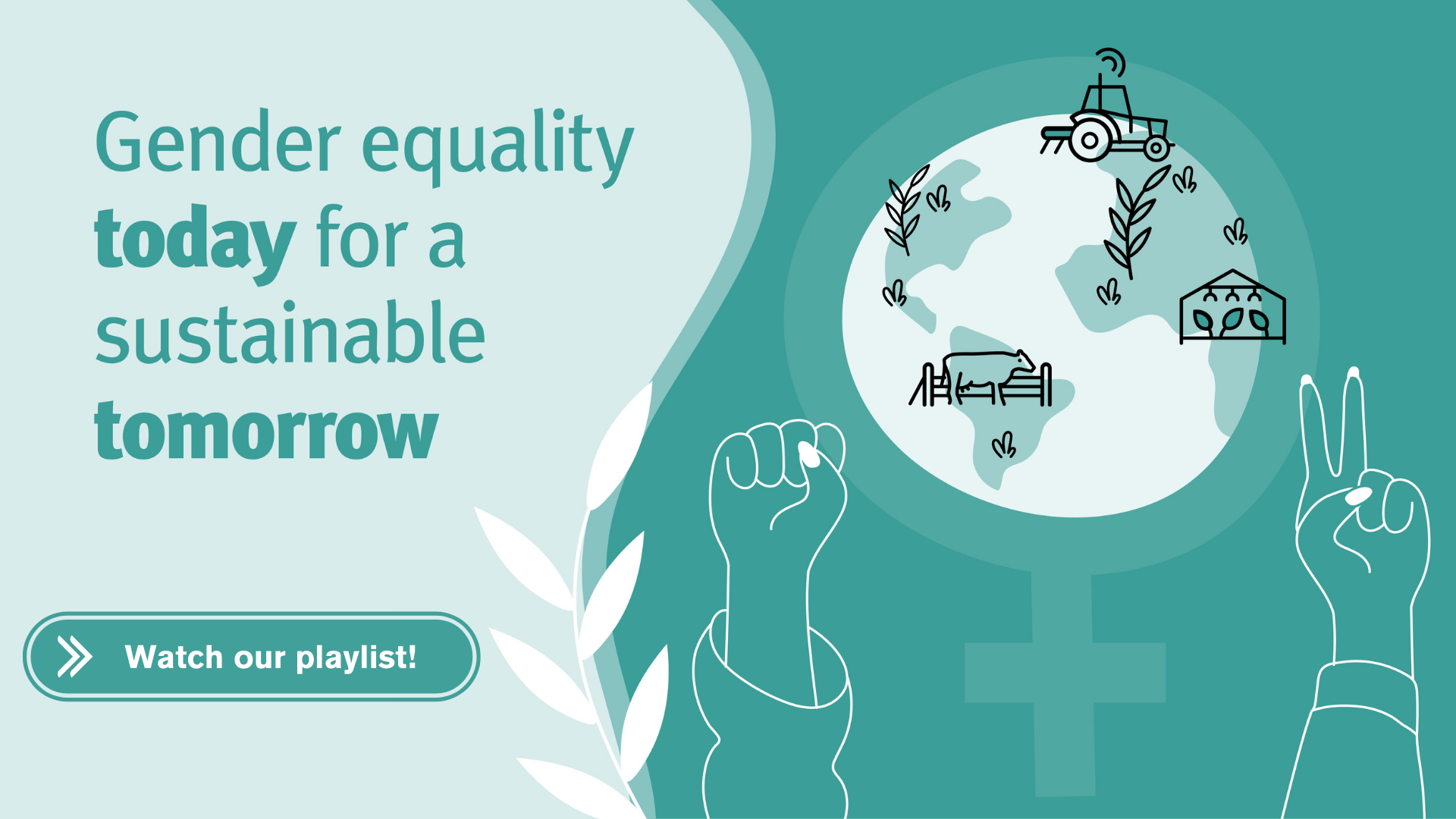 To celebrate the 8 March 2022, we gathered video messages from the SmartAgriHubs community, farmers, tech providers and Members of the European Parliament. The video messages followed the slogan determined by UN Women for 2022 "Gender Equality today for a sustainable tomorrow'.

Among the contributors to our video messages:

- Pilar Garrido Granados from the Regional Ministry of Agriculture, Livestock, Fisheries and Sustainable Development of Andalusia

- Michaela Glatzl, advisor to women farmers in the Austrian Chamber of Agriculture

-Margo Batthyany-Schmidt, Founder and President of the Union of Hungarian Women and member of the Women's Committee of COPA-COGECA

The Changing Face of Agriculture

The European agricultural sector is undeniably facing several challenges including an ageing population and gender inequality. However, tackling these challenges head-on can provide a professional development opportunity for new generations, in which women will experience an acceleration towards equality.

To clearly address the current status and the growing opportunities within farming, DEMETER and SmartAgriHubs, leading Horizon2020 projects promoting the digital transformation of the European agri-food sector, organized on 17 February 2022 the webinar “The Changing Face of Farming - discussing gender, youth, and digitalisation in agriculture”  to discuss the importance of attracting young people and women into agriculture.

The SmartAgriHubs team is preparing exclusive content for the 2nd edition of the European Parliament "Gender Equality Week 2021"!

Ntuthu Mbiko-Motshegoa is a South African agri-entrepreneur & SmatAgriHubs first Gender Ambassador. In this message, she addresses decision-makers attending the SmartAgriHubs event on 25th October and young women in rural areas in particular:

‘My message for young women [...] be aggressive in your approach, be ruthless with your time, spend time with people with some vision, and be creative and innovative’

This sets the scene for the launch of the European Gender Equality Week 2021!

Federica is a young farmer who went back to agriculture in the South of Italy, after working as a manager for Amazon in London. Within her farm, a circular ecosystem has been created, which includes crop cultivation for animal feeding, animal livestock for cheese production, a biogas plant , a photovoltaic plant, and  plant-based sewage-treatment facility.

In this interview, she shares her experience as a young woman in the agri-food sector and her recommendations to others.

In this blog, Manuel Delgado and Branwen Miles from COPA COGECA will explore the relation between innovation and gender in the agritech sector.

Martina is 26 years old. She recently lost her father, and is now working on the family dairy farm with her mother. Despite the lack of supports from her male colleagues, technology helped her to complete streignous tasks by herself.

Cristina comes from a fishermen family. She is now working for La Platjeta, a project aiming at connecting fishermen from La Barceloneta (Barcelone, Spain) and the final consumers, restaurants and small shops. With her organisations, she is working on changing the fishing sector from the inside.

On 15 October 2021, for the 2021 edition of the International Rural Women Day, SmartAgriHubs co-organized with H2020 project DEMETER an online event:"Gender in agri-tech".

Both DEMETER and SmartAgriHubs are leading Horizon2020 projects promoting the digital transformation of the European agri-food sector.

This free event, open to all interested attendees, gathered speakers from Europe and beyond. The line-up of speakers included members from agritech projects such as DEMETER, SmartAgriHubs, FAIRshare, Innoseta and also representatives from the European Commission and The Institute for European Environmental Policy.

For the 2021 edition of the International Women’s Day, the social media campaign “I support women leading in agritech” was launched. The campaign was first announced via a #GenderFriday post on 5 March. Members of the SmartAgriHubs and IoF2020 networks were encouraged to show their support by sharing a selfie on their social media channels, using the #IWD2021 hashtags and tagging the organisations. The campaign was a success, with the participation of members across Europe. 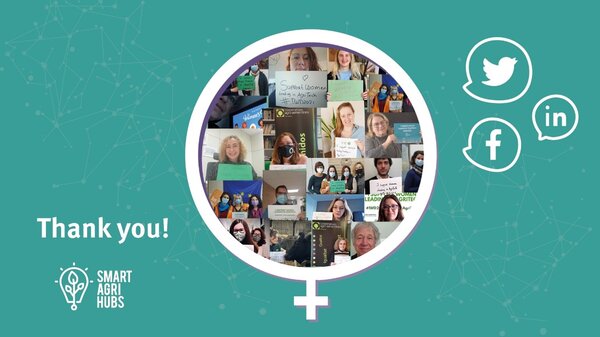 During the IoF2020 Final event on 17 March, the closing plenary was dedicated to “Gender Inclusiveness in Agritech”. This plenary closed a day dedicated to “Impact and lessons learned on IoT deployment”. The session was chaired by Jovana Vlaskalin and Dr Cynthia Giagnocavo, with a panel composed of Doris Marquardt from the European Commission, Doris Letina from CEJA, Ntuthu Mbiko-Motshegoa from the South African farmer community and Antonella di Tonno of an Italian agricultural cooperative exchanged. Within the session, the panellists discussed European policy, agriculture, farmers' initiatives, and the next steps in improving gender-balance.

Listen Lotta Folkesson (COPA-COGECA) message of encouragement on the #internationalruralwomenday

On the occasion of the International Day of Rural Women on 15 October 2020, SmartAgriHubs interviewed Lotta Folkesson - an active farmer in Sweden, a logging contractor, Chairwoman of COPA-COGECA’s Women's Committee, and Board Director at LRF (Federation of Swedish Farmers).

The Gender Task Force launched its first “Gender Equality Week” from 26 to 30 October 2020. This Gender Equality Week was simultaneous with the first ever European Parliament #EPGenderWeek, launched at the initiative of the FEMM Committee. It included a social media campaign, the release of podcast testimonials and a “gender equality toolbox” with practical guidelines on how to use gender-neutral vocabulary in meetings. At the end of this first “Gender Equality Week”, a call was launch for “Gender Ambassador”: men and women working in the agricultural, agri-food and agri-tech sector were encouraged to contact the Gender Task Force to take on an active role in promoting gender equality.

It included a social media campaign, the release of podcast testimonials and a “gender equality toolbox” with practical guidelines on how to use gender-neutral vocabulary in meetings. At the end of this first “Gender Equality Week”, a call was launch for “Gender Ambassador”: men and women working in the agricultural, agri-food and agri-tech sector were encouraged to contact the Gender Task Force to take on an active role in promoting gender equality.

A similar campaign is planned for October 2021.

In July 2020, in collaboration with H2020 sister-project IoF2020, SmartAgriHubs released a special edition of its quarterly newsletter:"Gender equality in the agri-food sector". This edition is one of the most read publications of SmartAgriHubs, gathering testimonials and research.

Read the interview with Ekaterina Ukhandeeva

Want to help and join the journey towards equality? Become an ICT-AGRI-FOOD AMBASSADOR. Click here to find out more!

Read the interview with Maxine Roper from Connecting Food here!