On the 9th of April, 24 EU Member States signed a declaration of cooperation on ‘a smart and sustainable digital future for European agriculture and rural areas’. The declaration was signed in Brussels on Digital Day, a day on which EU institutions and stakeholders from industry, academia and civil society come together to take digital cooperation forward. Both SmartAgriHubs and IoF2020 were mentioned in the declaration as exemplary projects for a smart and sustainable digital agriculture.

In the declaration, the member states acknowledge the vast challenges of today’s agriculture. For a promising agricultural sector in the future, sustainability is the key word. Sustainability in both economic, environmental and social terms. To this end, the European Commission encourages an ‘evolution of farming systems’.

According to the Member States, digital technologies play a critical role in realising this evolution. They carry the potential to improve the quality of life in rural areas and boost the competitiveness of EU farms. So far, the uptake of these technologies by farmers is rather low.

Therefore, the member states declare their determination ‘to create the necessary conditions so that all workers in the agricultural sector have an opportunity to acquire the skills needed for the smart farms of the future’.

Within IoF2020 and SmartAgriHubs, we work on these smart farms of the future every day. These efforts did not go unnoticed. Both projects were listed in the declaration and on the website of the European Commission as EU funded projects on advanced digital technologies for agriculture. The member states declare their intention to ‘build on ongoing initiatives such as the SmartAgriHubs network and ensure that agriculture is covered as an area of expertise in at least one digital innovation hub in each member state.’ Also, they acknowledge the importance of large-scale IoT pilots such as IoF2020 and support the pre-requisites of IoT pilots such as wireless networks.

The acknowledgement of IoF2020 and SmartAgriHubs in the declaration is good news. The majority of the member states declared a clear policy direction on the future of EU agriculture and SmartAgriHubs and IoF2020 are exemplary projects of this announced direction. This strengthens the continued trust and support from the European Commission, encourages and comforts our project members in their work and boosts the visibility for our projects. Keep up the good work!

Nevertheless, the Member States acknowledge the significance of the revision of the Common Agricultural Policy (CAP) for the uptake of digital technologies and a sustainable agriculture, and will work together to draw up CAP strategic plans that complement this declaration.

You can find the official press release here 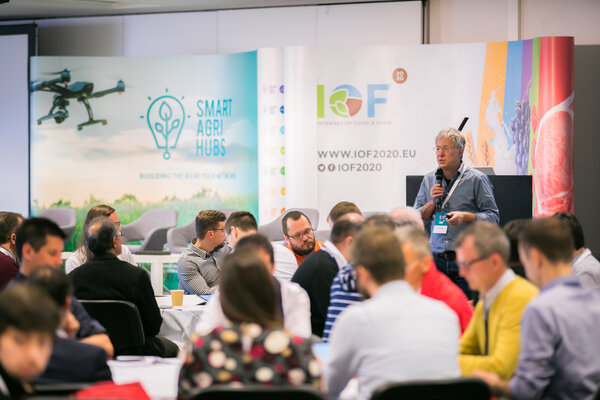